With over 600 listed species, Botswana is a top birding destination thanks to its extremely diverse habitats. These  converge together in a relatively small area allowing for an amazingly varied birding safari. From the fertile wetlands of the Okavango Delta and the rich banks of the Chobe River to the dry grasslands and salt pans of the Kalahari – and a network of varied ecosystems in between – Botswana’s landscapes offer a stunning variety of habitats for birds. Botswana is a birdwatchers paradise.

Most mixed camps will provide an overview of the delta’s birds, but for true birdwatching enthusiasts a specialist birding safari will provide the best experience.

Interestingly, Botswana has no endemic species of its own, although there are several specialities for which birders are keen to travel all this way including the Pel’s Fishing Owl, Slaty Egret, Hartlaub’s babblers; Swamp Boubou and the Brown Fire Finch amongst many others.

Botswana’s wetter months with high temperatures between November to February are considered the best time for keen birders to visit the area since most of the intra-African and Palaearctic migrants are present and the resident species are in breeding plumage. Birding excursions with a knowledgeable bird guide comes is recommended and is likely to enhance your overall safari experience. 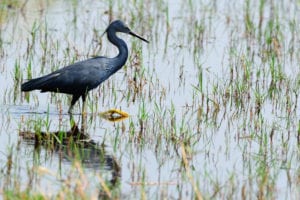 October, following the rains, is another excellent time to visit the Okavango Delta for birding when internationally important species such as Slaty Egret, Lesser Jacana and the Wattled Crane are on every avid birders’ top list. The south eastern Okavango area in particular is good for these species, camps include Chitabe, Chitabe Lediba, Qoroke and Sandibe. The Chitabe concession is a fairly dry area well known for its many thriving raptor species.

In the far north of the Okavango, on the Duba concession, for these same egrets, Jacana and cranes are frequently seen, as well as the rare Pel’s Fishing Owl. A huge variety of Herons are on display including the White-backed, Night and Rufous-bellied Herons as well as the ever elusive African Finfoot.

In the Moremi Game Reserve in the heart of the Okavango, Mokoro excursions from Chiefs Camp often give rise to close sightings of water birds such as the African Jacana with its ungainly long legs and the Pied Kingfishers, frequently seeing hovering over the water waiting for its next meal at which point it dives down at an incredible speed into the water to fetch it’s catch. 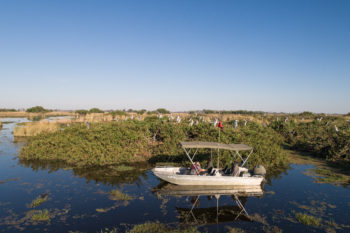 In the western Okavango, a visit to the seasonal heronry at Kanana Camp, situated on the Xudum River, is a highlight for many a guest staying at this lovely camp. 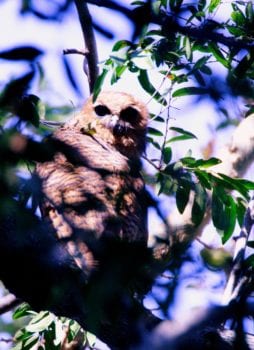 In the north west of the Okavango, the Jao concession offers some lovely birdwatching opportunities, notably at Jacana and Pelo Camp, both surrounded by water and located on a small islands amidst the Jao flats. These areas attract birds including saddle-billed stork, African Darter, Reed Cormorant, Slaty Egret, and Goliath and Rufous-bellied Herons. Expect to see vast numbers of these at Jao Camp too as well together with regular sightings of Yellow-billed and Woolly-necked Storks, Hadeda Ibis, Painted Snipe, Black Egret, Sacred Ibis, Wattled Crane, and Pel’s Fishing Owl. 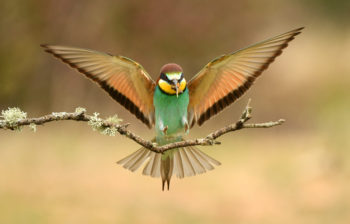 The open areas in the Linyanti concession are excellent for spotting the larger land species – such as the Kori Bustard, recognised as Africa’s heaviest flying bird, Ostrich, Secretary Bird, and Southern Ground-Hornbill. During the summer months, Southern Carmine Bee-Eaters flock to the dry grassy area – quite a phenomenal sighting considering that these birds normally form their colonies on the sides of riverbanks.

The seasonal Savute Channel is also known for its high concentrations of eagles and raptors and this area is internationally recognised as an IBA (Important Bird Area). Dickinson’s Kestrel are found here and nocturnal species- Nightjars, coursers and various owl species such as such as Verreaux’s Eagle-Owl and African Scops-owl are seen on night drives hosted by select camps. Ideal camps to stay at in this region include King’s Pool, DumaTau, Savuti and Linyanti Tented camps.

On the Selinda Reserve, the beautiful Zibadianja Lagoon, the source of the Savuti Channel, offers very good birdwatching too. From the very luxury Zarafa Camp, offering some of Botswana’s best birdlife. Specials include Skimmers (nesting in September on the lagoon opposite DumaTau Camp – as well as at Zibadianja), Slaty Egret and Black Heron, Rufous-bellied Heron, Greater Painted-snipe, Chirping Cisticola and Luapula Cisticola African Pygmy-Goose, Long-toed Lapwing. 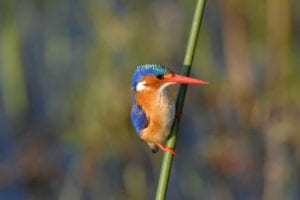 With over 450 recorded species, the Chobe river, apart from its impressive herds of elephant, also offers wonderful birding safaris – an experience to be enjoyed immensely from the riverbank or from onboard one of the many boat excursions on offer.

Another birding safari highlight in Botswana are the vast numbers of pink flamingos of the Makgadikgadi Pans. Flocking to the pans in the wet season  – shrimps and small crustaceans and warm water algae.  Both the greater pink flamingos and the lesser pink flamingos come to this place to mate and to lay their eggs in nests that they construct from clay in the ground. In the North-Eastern part of the Sua Pan one of the most important breeding sites in the world for flamingos it is quite possible to find over 100,000 specimens.

It is here, where the flamingos are concentrated, that Nata Bird Sanctuary  is found -its mission being to preserve this unique and delicate and habitat. Other species to be found here  include: White Pelican, Secretary-bird, Montagu’s and Pallid Harriers, Marshal and Tawny Eagles, Red-necked Falcon, Greater, Lesser and Red-footed Kestrels, Burchell`s and Yellow-throated Sandgrouse, Wattled and Crowned Cranes, Ground Hornbil, Bronze-winged courser, Red-winged and Black-winged Pratincoles, Spike-heeled, Pink-billed, Rufous-naped and Clapper Larks, Chestnut-backed Finchlark, Capped Wheatear. 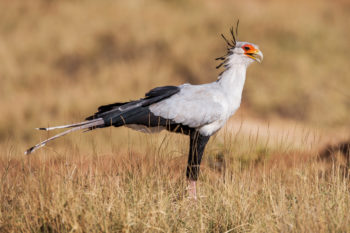 Botswana is a superb destination for birding watching  – if this is your interest then be sure to contact us for a specially designed safari itinerary.

What is a Botswana mobile safari?
What to do in Victoria Falls?

Contact us for more information on birding in the Okavango Delta