Nestled along the riverine forest below the shade of the sycamore trees in a quiet corner of the Khwai concession lies Machaba Camp. There is a friendly down to earth feel to this camp, offering an authentic safari with plenty of sophisticated touches to make this a spoiling experience. Stylish and thoughtfully designed rooms, excellent food and great guides come together to deliver a great all round safari.

Machaba Camp lies in the eastern corner of the Okavango which boasts some of the finest and most consistent game viewing, with regular predator sightings and notably offers good opportunities to see some of the rarer species like wild dog. This area is well known for the excellent year-round game viewing, and while this has attracted a lot of visitors in the recent years this lovely camp sits in a less busy area and offers a fantastic safari experience. Activities focus on morning, afternoon and evening drives while walking and mokoro rides are also offered, water levels permitting. For those interested in experiencing some of the local culture a visit to the Khwai village can also be arranged.

Machaba Camp itself is a newer camp which was opened in 2013 on the site of the old Machaba Camp. It is part of the Machaba Safaris group of camps which also includes Machaba Camp, Little Machaba and Verney’s Camp. Machaba is the local Setswana name for the Sycamore Fig, or tree of life. The lodge is sited on an attractive open place by the river within a sparse Sycamore Fig woodland; it is a mix of shallow waters and dry areas which form the most extensive part of the area. The fruit of the Machaba tree is a favoured source of food for elephant, baboon, bush buck and birdlife all of which will be drawn to the vicinity of the camp when the Machaba are in fruit.

There are 8 standard twin/double rooms and 2 family tents with a maximum of 24 guests, all en suite and extremely comfortably furnished. The rooms are very spacious and certainly the word ‘tent’ does not do them justice. Machaba Camp is a classic luxury tented camp, designed in the style of the original safari each of the stylish tented rooms is firmly rooted to the sandy ground – a feature the camp owners are proud of as more and more camps across the Okavango favour stilted rooms. They are not raised on platforms above ground level which makes them different from many camps; instead they are set on concrete plinths at ground level and the polished concrete floors in the interior of the tents are completely covered with mats on which are attractive kilim rugs

The tents are very much 1950s tent style, so you will find the aura of a pioneering early era safari but cleverly and luxuriously brought up to date with twenty first century standards and comfort. The rooms are canvas and metal pole structures in a traditional large safari tent style. Each has a large veranda porch area with a table and chairs. The interior is revealed behind zipped canvas doors; beds are large doubles or twins and each room has a large teak writing desk. Every room is en suite with twin washbasins, an indoor shower and an outdoor ‘bucket’ style shower. The family tents consist of two joined tents with a shared bathroom tent. Good quality toiletries are provided.

The main area has open sides which gives an airy, light feel and makes the most of the views over the Khwai River and the vistas of the Moremi Game reserve beyond. The main area consists of a comfortable and plush lounge and a communal dining area, both  overlooking the river and fire area. The large lounge is comfortable and well furnished with tables and sofas and the library is well stocked with books on the area and its wildlife. The drinks cabinet and fridge is open for guests to help themselves at any time. To the other side of the central area is the dining room. Guests may eat at a long communal table in the evening, and for lunch and breakfast there are individual tables. The food is buffet style and tea and coffee is provided for self-service all day.

Machaba describes its cuisine as ‘bushfare’; chefs are Batswana and experienced in producing local traditional food for the palates and enjoyment of tourists. Private dinners can be arranged either in guests’ rooms or on the swimming pool deck (but due to safety considerations inherent in the deck being far from the main camp, a guide will need to be nearby in case of predators).

The secluded circular swimming pool is situated near the river at the eastern extent of the camp, surrounded by a wooden deck on which are sunloungers. It is a wonderful experience to watch the river life happen in front of you whilst you swim in the cooling water.

The concession borders the renowned Moremi Game Reserve which lies to the south and therefore benefits from the excellent game of the reserve, which is unfenced and therefore can travel freely into the Khwai concession. The wildlife really is excellent and you have a good chance of seeing leopard and the wild dog populations here. There have been reports of fewer lion sightings in recent years. Of course, because the Khwai is a private concession, safaris here can encompass activities which would not be possible in the Moremi Game Reserve, such as night drives, walking and the ability for guides to drive vehicles off road in order to get a better look at the game.

The water levels in the Okavango Delta (and indeed the presence of water at all in the more peripheral Delta areas) depend on floods each year from Angola. However, the Khwai River is not dependent on these floods. Obviously, the river levels do rise or fall, but this is governed by local rainfall rather than the Delta levels. Khwai is a good option for the ‘shoulder’ season therefore because the game is good throughout the year whereas the water situation in the Delta ‘proper’ can mean that the game concentrations vary with the huge variation in water according to the flood levels.

Spa treatments are available from a spa therapist who can be booked to give a massage or facial in guests’ rooms.

The camp electricity is a hybrid system of solar and a generator. The hot water is a thermodynamic solar energy system. 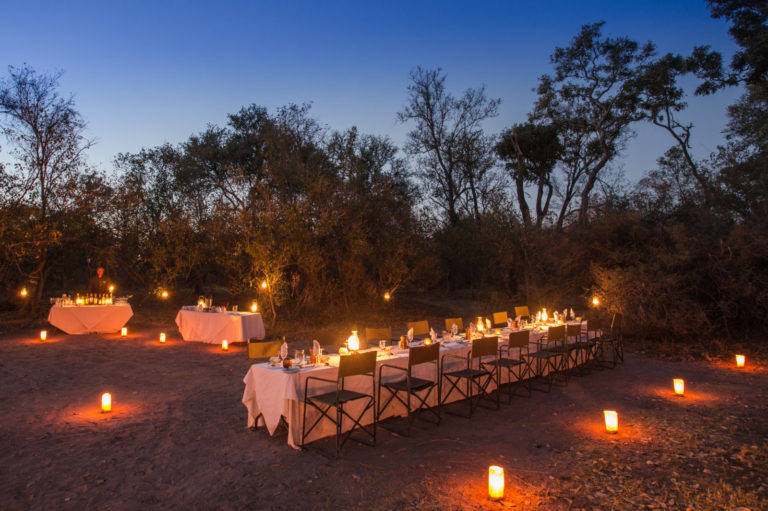 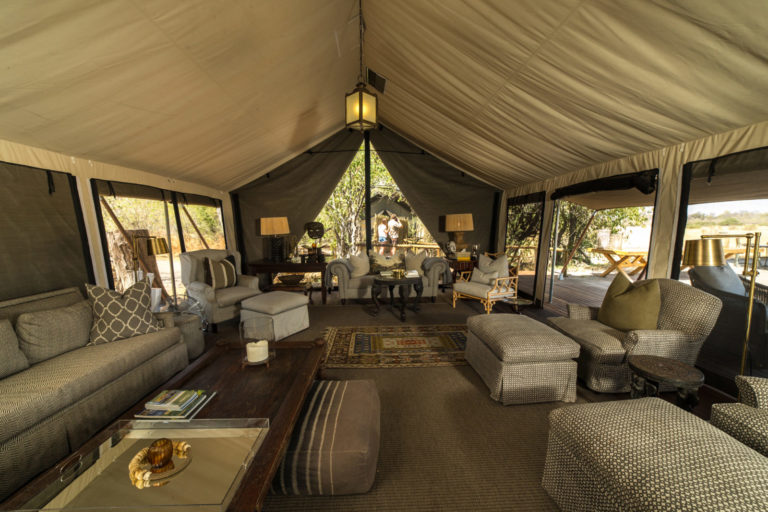 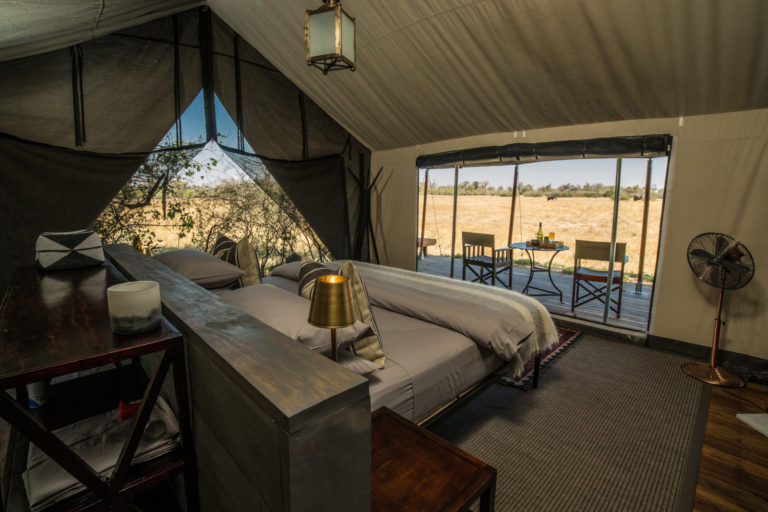 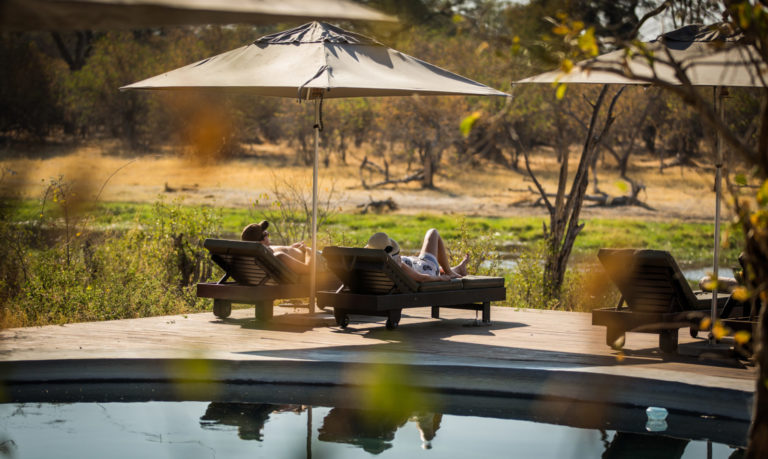 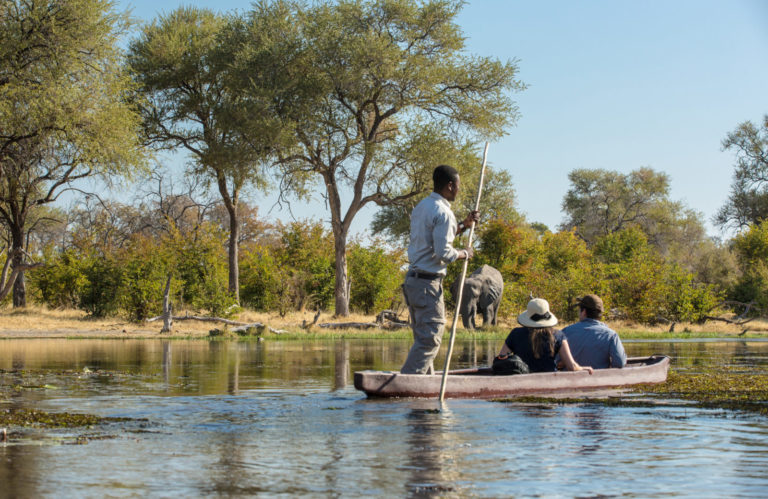 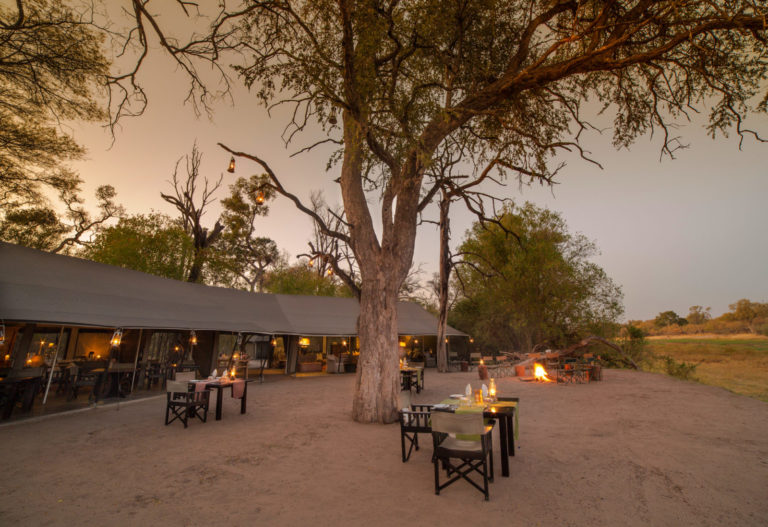 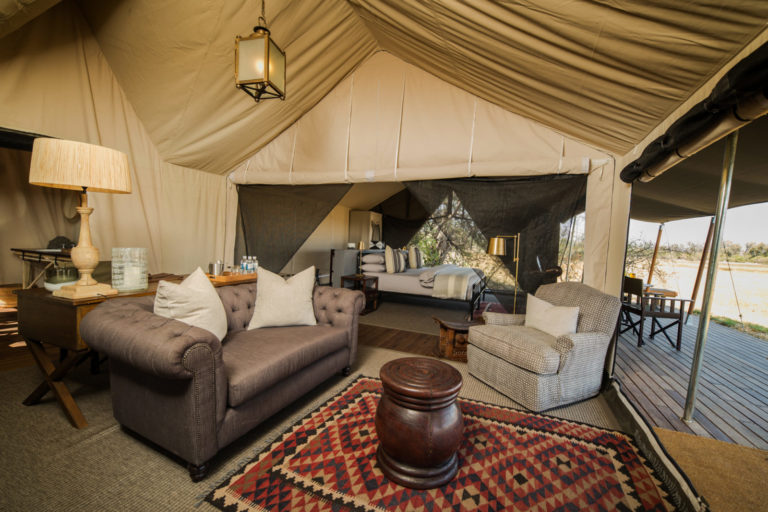 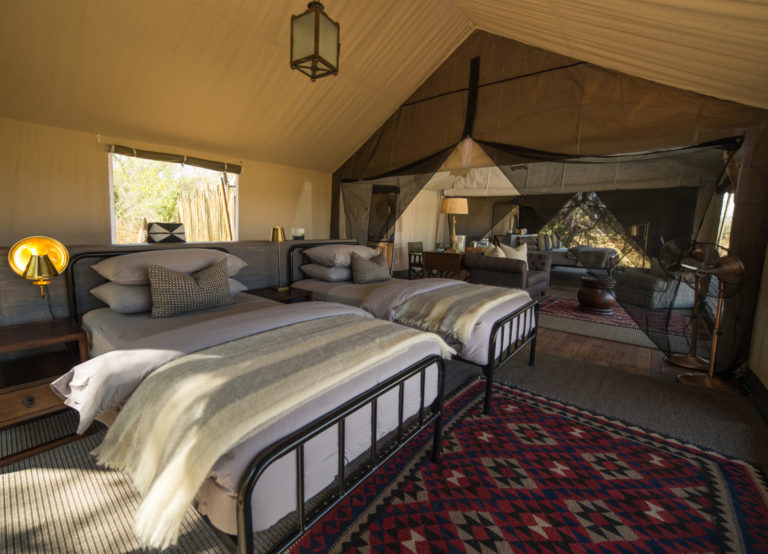 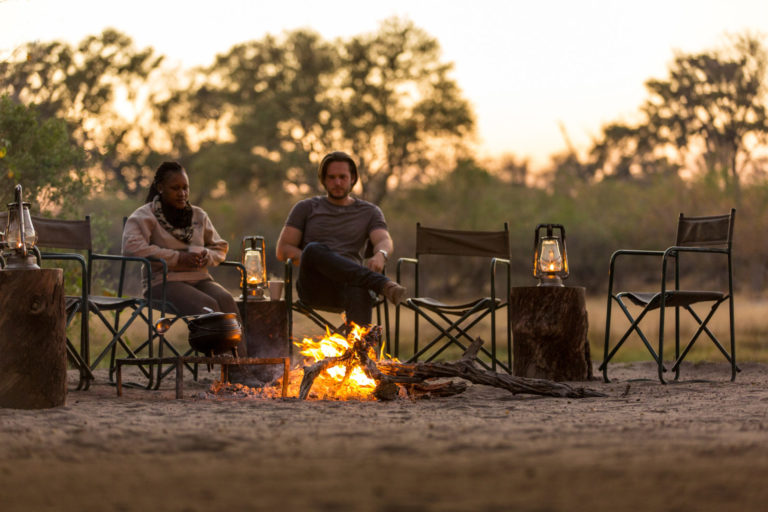 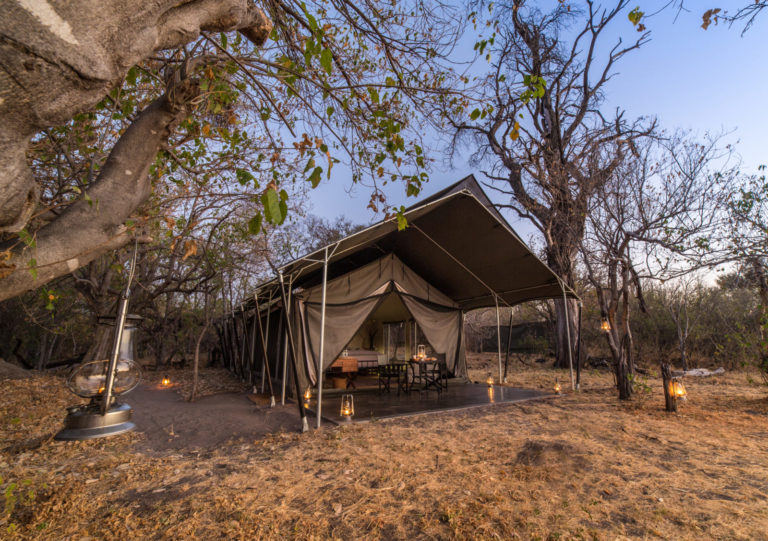 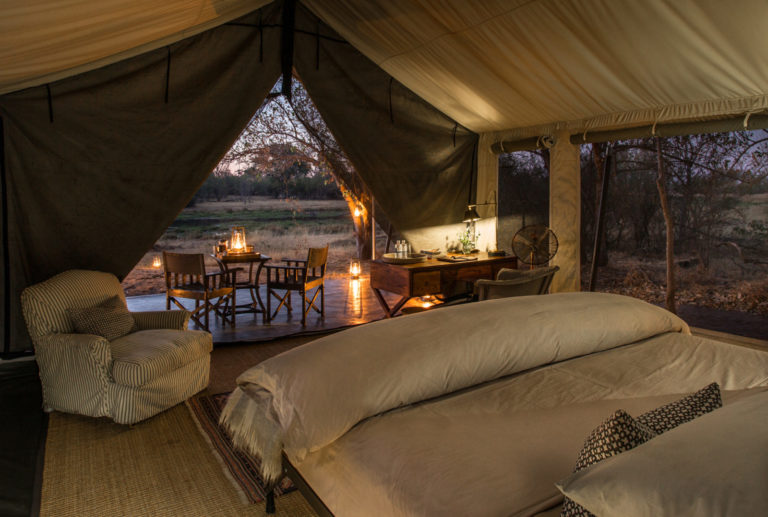 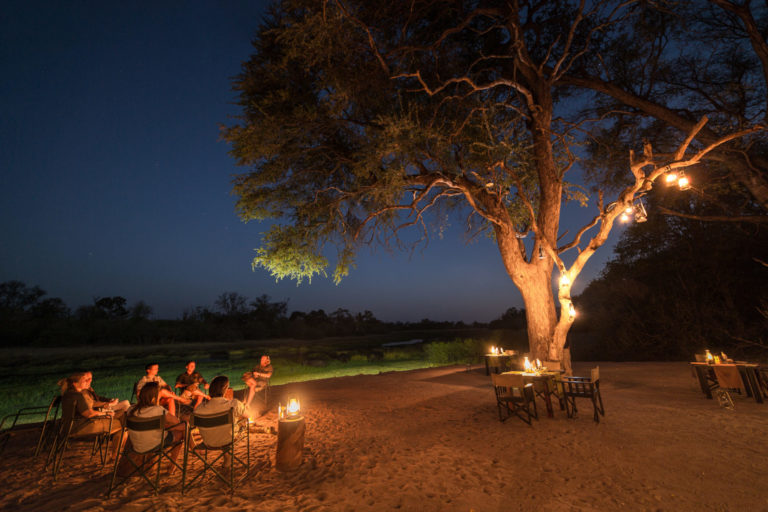 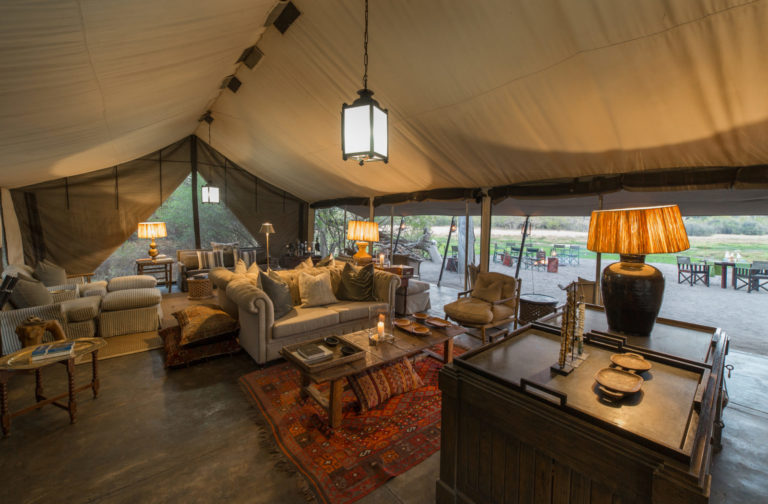 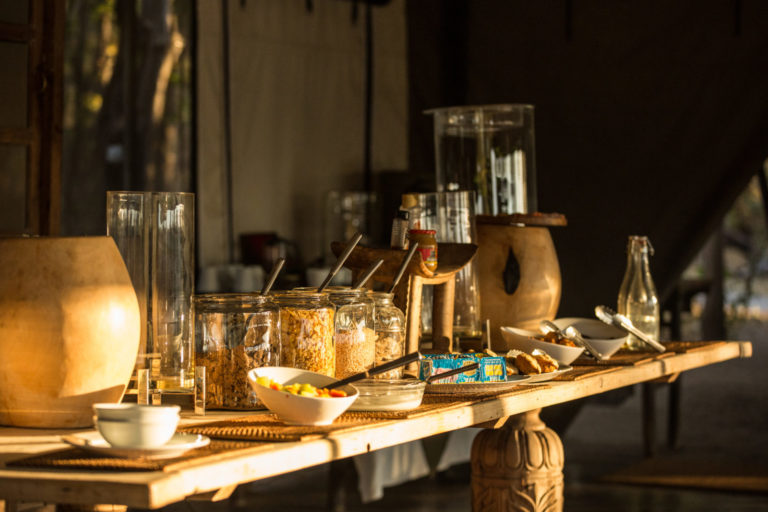 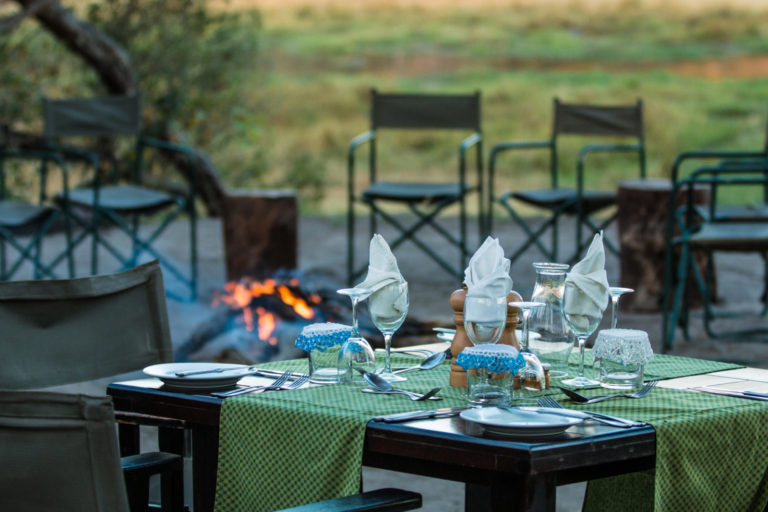 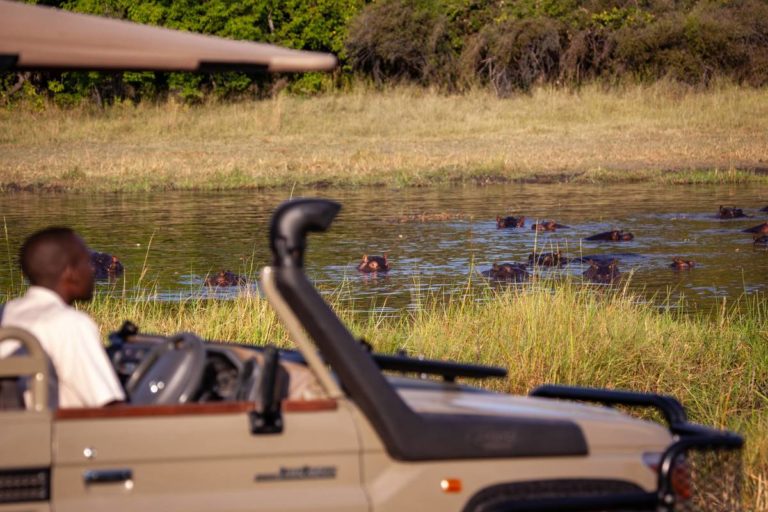 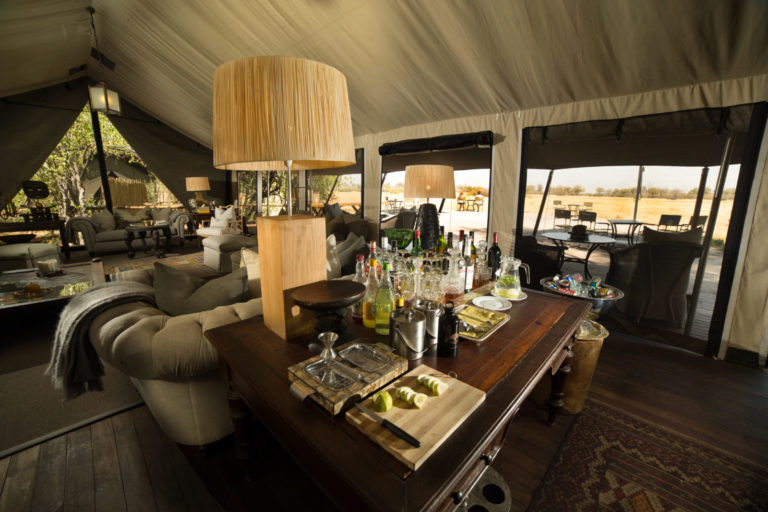 Machaba Camp On The Map

Gomoti Plains Camp is a classic tented camp with a modern elegant style overlooking the Gomoti river system in a particularly scenic and game rich area of the Okavango Delta. Ten spacious and thoughtfully designed tents offer a fantastic base to explore this exciting area. This area consists of a variety of habitats, from woodland to open grasslands and wetlands attracting an interesting array of wildlife and good concentrations of animals year round. An excellent classic camp.

Ngoma Safari Lodge is set within the peaceful Chobe Forest Reserve, just 3km from Chobe National Park – with its infinite views over Chobe’s seasonal floodplains. A sanctuary away from the Kasane crowds, this small luxury lodge bears witness to the prolific game found along Chobe’s riverfront from its rocky height along the escarpment. Ngoma Safari Lodge offers a range of activities including game drives within Chobe National Park, boat cruises and night drives within the Forest Reserve.