In a private concession, allowing off road and night time game drives, Mma Dinare is a lovely camp located in an exciting game rich area. The experience here is land based although mokoro trips are possible when water levels allow, usually June to September. Thatched and open, the main area is a great place to relax and watch the wildlife drawn to the Gomoti river. The rooms are spacious with their own verandas.

Mma Dinare (meaning ‘Mother Buffalo’ in Setswana) is a lovely camp set on the Gomoti river in the south-eastern side of the Delta. The camp lies in a private concession, the Dinare concession, of 272 square kilometres/67,000 acres. This is a subdivision of the Santawani area and is a community area managed by the Sankuyo Tshwaragano Management Trust. The Dinare concession is limited to forty guests in two camps run by the same operator (Rra Dinare is Mma Dinare’s sister camp), resulting in a low tourist density and a more exclusive safari experience.

The concession is adjacent to the Moremi Game Reserve and benefits from crossflow of wildlife from the reserve.

The camp has nine tents including one family tent and one additional guide’s tent. All have canvas porched individual decks and views across the Gomoti River and the surrounding floodplains with seasonal water are the archetypal Okavango wetlands landscape. The rooms incorporate canvas for a traditional safari feel but the furnishing gives a modern twist. Bathrooms are en suite and have double hand basins.

The main area at Mma Dinare Camp is open and thatched so as to harmonise with the natural beauty of the Delta’s riverine forest and there is a bar, swimming pool and curio shop. The dining/sitting area is raised on stilts and decked and an attractive fire pit area runs off it.

Day and night game drives are on offer and take place on and off road. Vehicles will take no more than six people plus the guide and, for night drives, a tracker. Game drives are the predominant focus though mokoro rides on the Gomoti river are possible albeit water dependent, if the river levels permit, generally June to August or September. Mokoro trips are not quite the same as more central Delta areas because they are limited to one larger waterway.

Walking safaris are also available depending on the seasonal conditions – thick vegetation or high numbers of elephant in the area for example would restrict walking. Often this experience will concentrate on the smaller details of the bushveld offering fascinating insight to the bushveld and the guide’s tracking skills: learning about smaller plants and animals although you may be able to come close to giraffes or other large animals which is an entirely different experience from motorised game viewing.

The game viewing at Mma Dinare Camp experience in this concession is regarded as very productive and rich. Mma Dinare Camp benefits from the wildlife of the Moremi Game Reserve. The Santawani concession usually receives Delta floods and because of its south eastern position in the Delta, generally provides dry season watering points for the game that moves into the Nxai and Makgadikgadi pans during the rainy season when there is food in those areas. This water results in good dry season game density, although the movement of game does mean that often the predators such as Lions and Wild Dog are on the move rather than holding territory in the area. Furthermore, the Mopane woodland of the area is another draw for animals during the rainy season and the start of the dry season, although the mopane woodlands are often less game rich than the river frontage and the floodplains. There are also attractive hardwood forests.

Birdlife is varied and wide ranging due to the combination of habitats. The Mopane and Acacia woodlands and grasslands are home to Raptors, Shrikes, Sunbirds, Ground Hornbills and many more species. The Okavango wetlands support aquatic avians such as Ibis, Storks, Hammerkops, lapwings etc. The wide variety of game found in the area includes: Giraffe, Hippo, Crocodile, Elephant and Buffalo and smaller mammals such as Honey Badger. Kudu, Tsessebe, and Impala are to be found but in addition so are antelope seldom seen in the Okavango area such as Roan, Sable and Eland. The Gomoti river is a draw for big cats: Lion, Leopard and Cheetah who will visit the river to drink.

Mma Dinare Camp prides itself on its eco-credentials, based on its use of solar and waste technology. 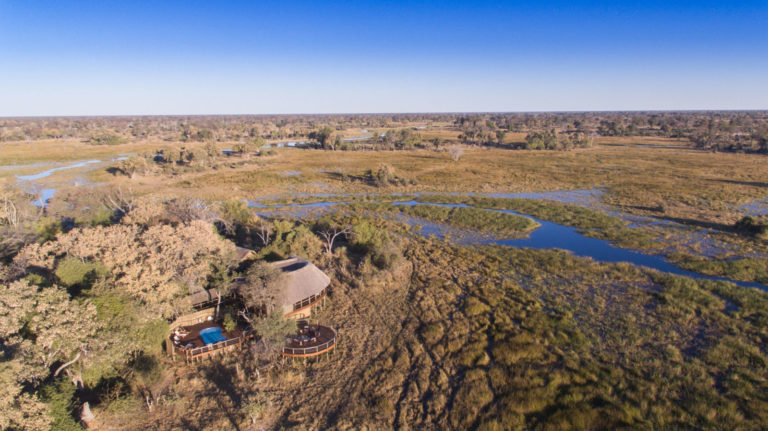 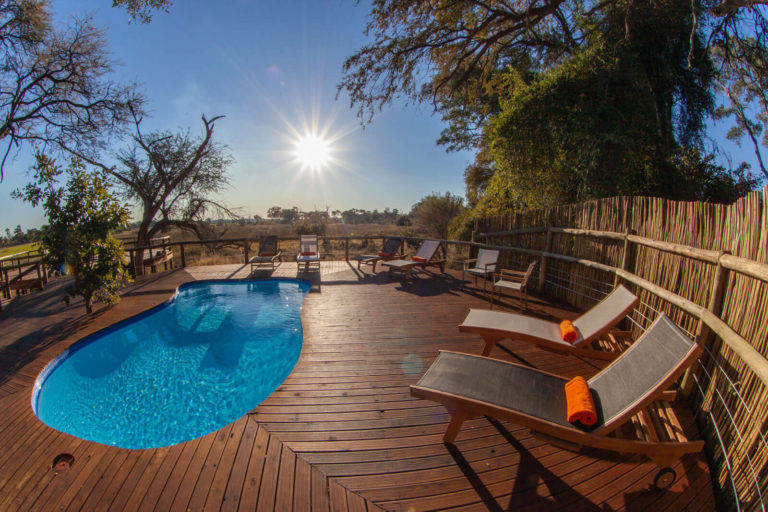 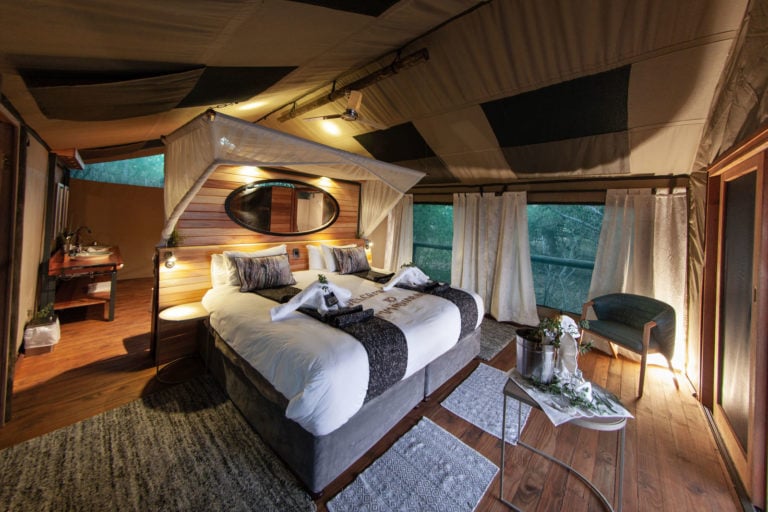 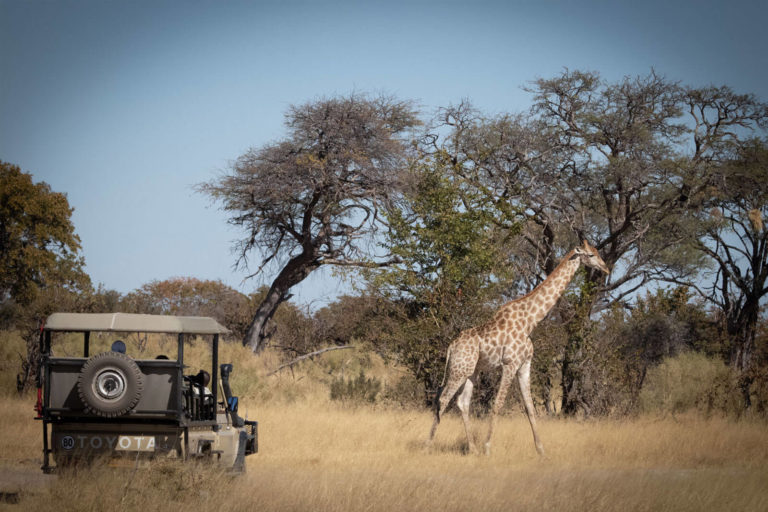 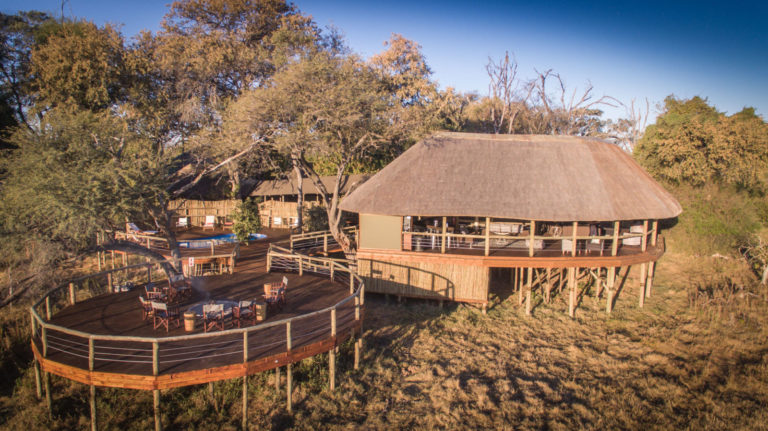 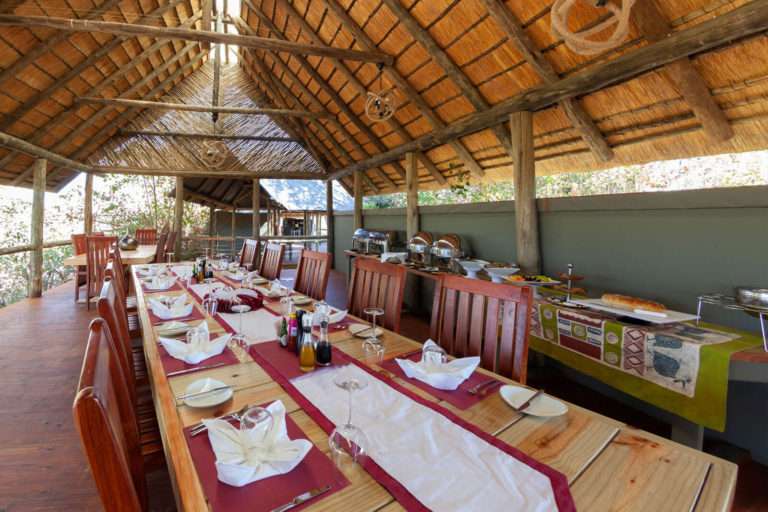 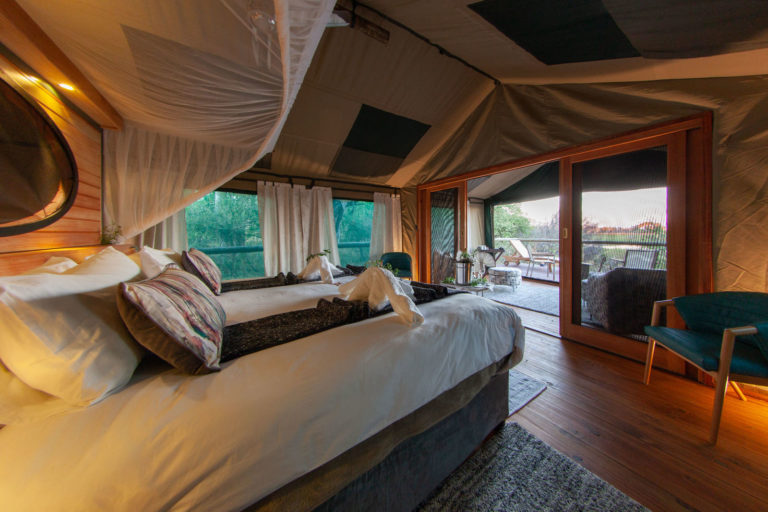 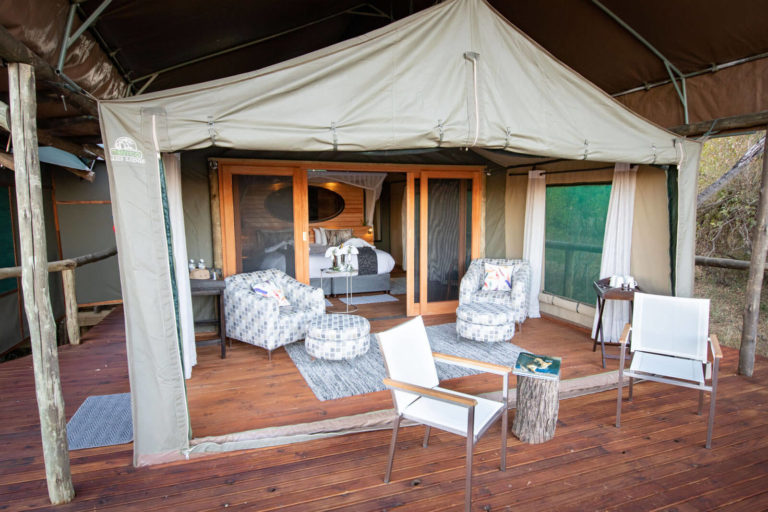 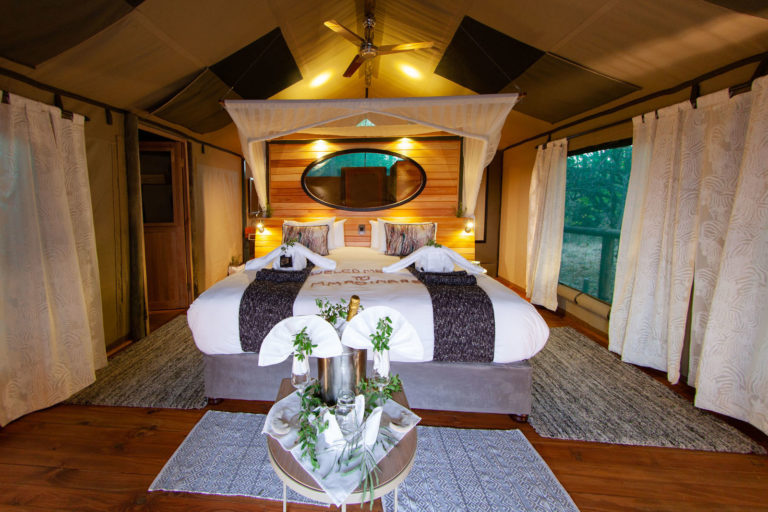 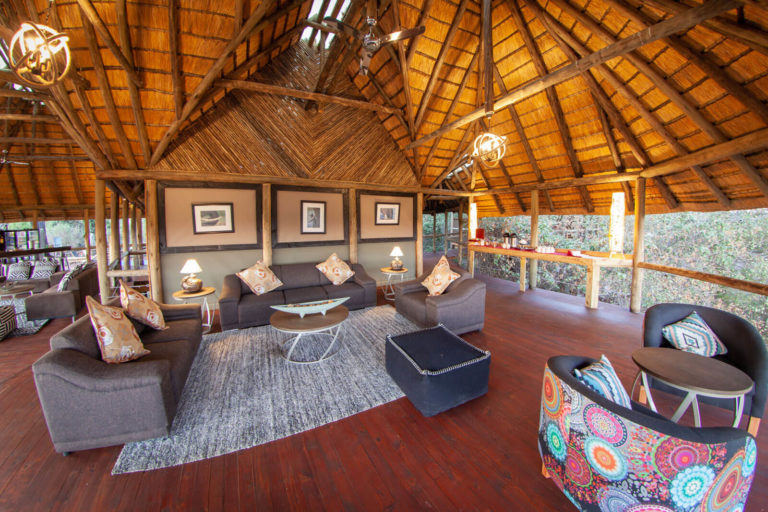 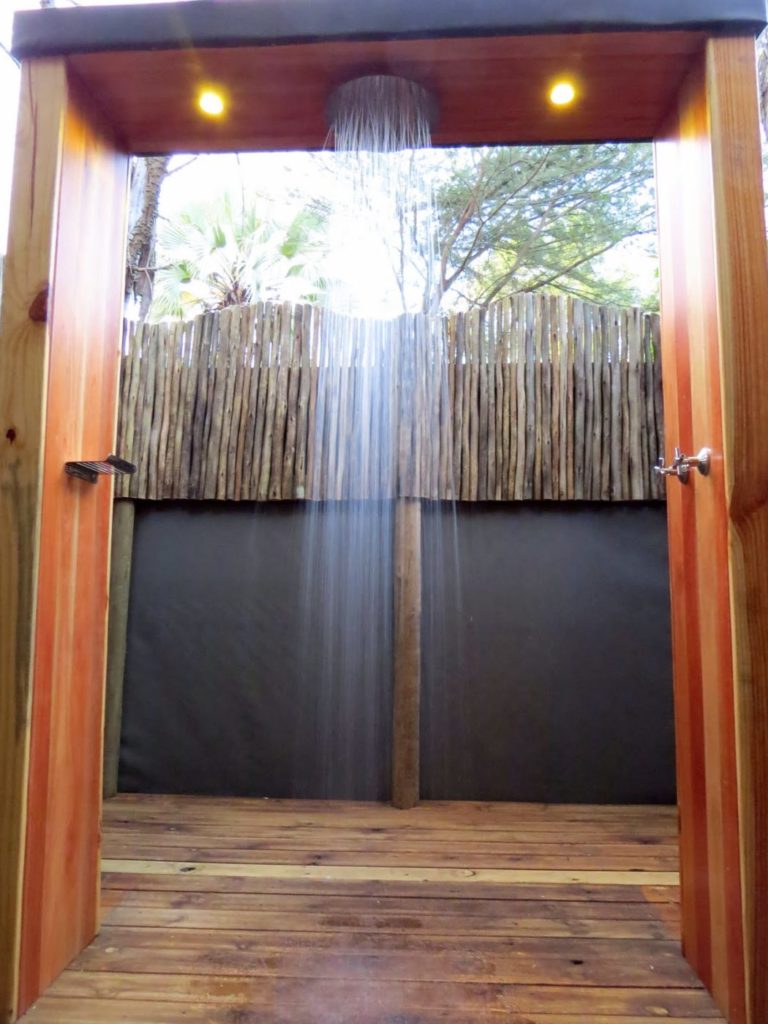 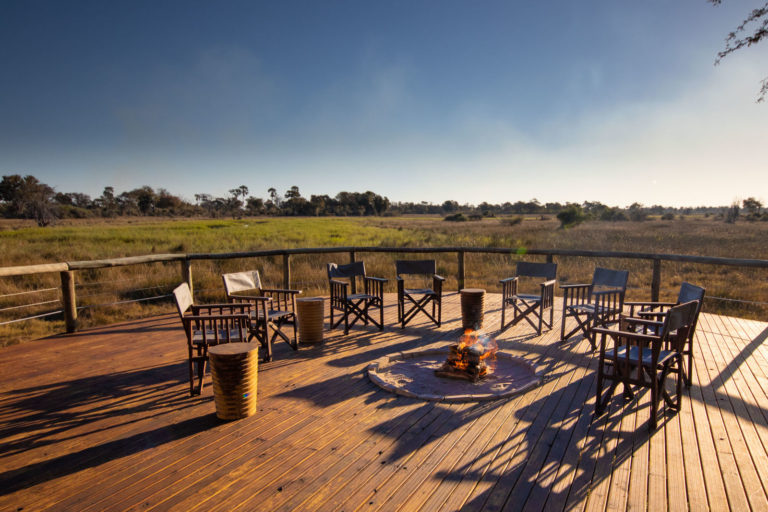 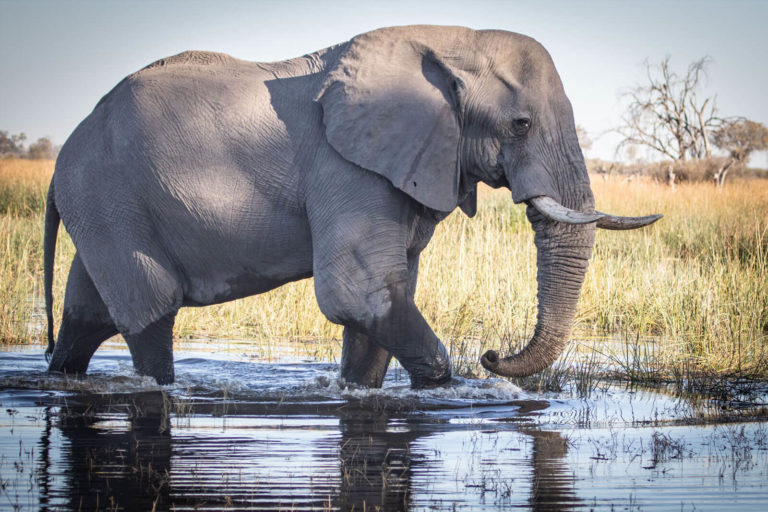 Mma Dinare Camp On The Map

Long established Pom Pom Camp is a charming camp set on the scenic island of Pom Pom in a private concession at the head waters of the Xudum river system. Lying on the western boundary of the Moremi Game Reserve the game viewing in this pretty area is varied and interesting, enjoyed through a variety of land and water activities. A traditional, comfortable and friendly camp, Pom Pom is an old favourite in the Okavango.

With a fantastic location on the banks of the Kwando River in the far north of Botswana, Lagoon Camp offers a superb big game safari from a tranquil waterside setting. One of only two camps on the vast Kwando concession, a remote, wild and game lively area, Lagoon Camp offers a very exclusive safari experience. Lagoon is a traditional, pleasant camp with a simple style and focus on exciting game drives and serene boat cruises.