Owls are so unique and distinctive that even those with only a passing interest in birds are impressed by these extraordinary birds of prey. Botswana offers wonderful birding opportunities with over 600 recorded bird species, including 11 species of owls. It’s range of different environments attracts a broad range of bird species making it popular for bird safari tours.

Prominent in folklore across the world, the owl is often revered for its wisdom and holds a place in many people’s hearts. Though in fact there is little evidence to support this theory. It probably results from the owl’s large eyes and skilful hunting.

Owls have many interesting characteristics. Their flattened faces help to funnel sound to their ears and they can turn their heads 270 degrees. Owls are silent predators – it is impossible to hear them in flight thanks to their highly specialised feathers. Owls are far sighted and have three eyelids – and the colour of their eyes can indicated when they prefer to hunt. They are extraordinary birds.

Owls are often seen in and around camp, as well as on game drives. Listen out for their calls at night – the Pel’s Fishing Owl is very deep and rather eerie. The Scops Owl has a rather lovely call, a quivering distinctive ‘prrp’ almost insect like sound and a familiar sound to the bushveld at night.

Below is a brief description of each species. 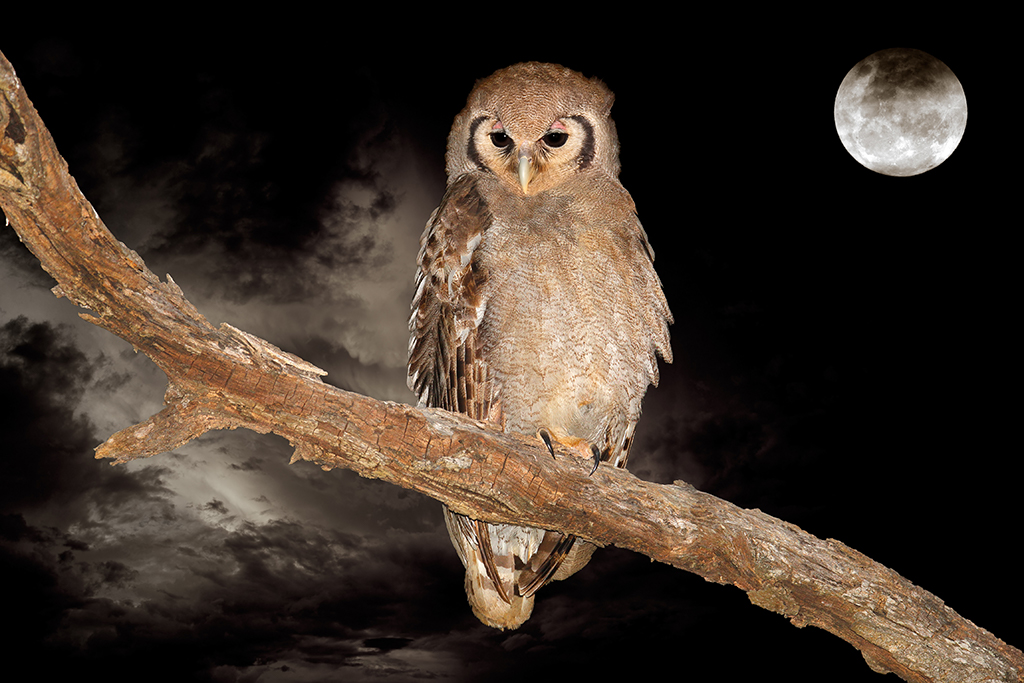 Also known as the Giant Eagle Owl, the Verreaux’s Eagle-Owl is the largest owl in Africa, up to 66cm in length. It is mostly grey with distinctive pink eyelids, a characteristic shared by no other owl in the world. It is a powerful and formidable hunter – with a wide range of prey from frogs to monkeys and even large birds such as herons and flamingos. Males can weigh up to 4 Kgs. 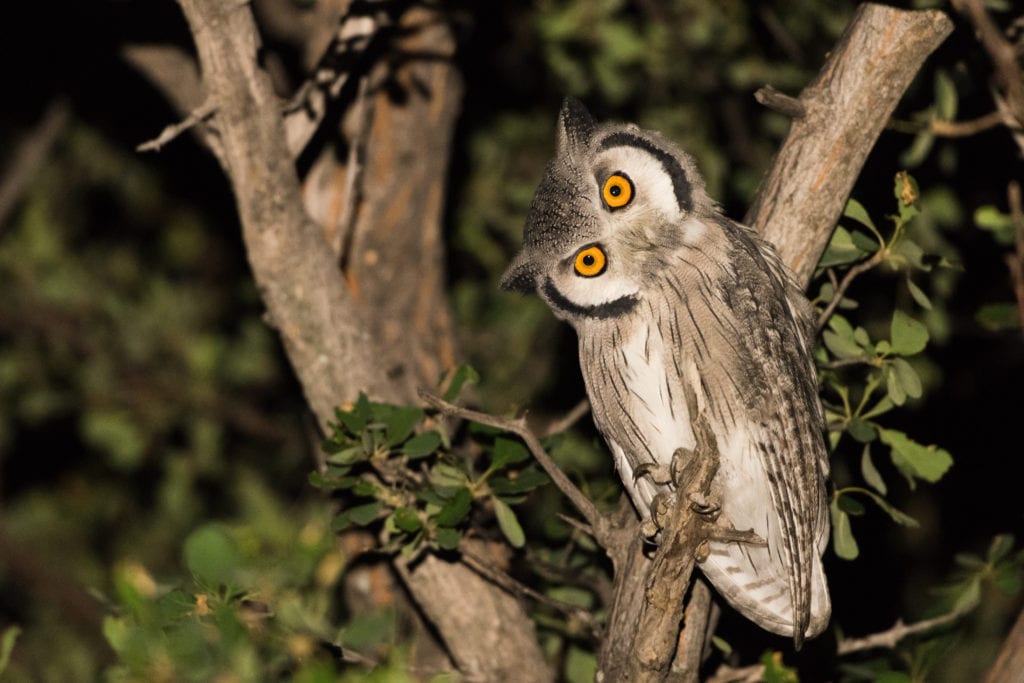 A striking facial disc and long ear tufts. Similar to, but much larger than, the Scops Owl. It has a rather charming call, a series of dove-like notes. It feeds on a wide range of both invertebrates (moths, beetles, scorpions) and vertebrates (rodents, birds). Southern White Faced Owl is around 25cm long and weighs around 200 grams. 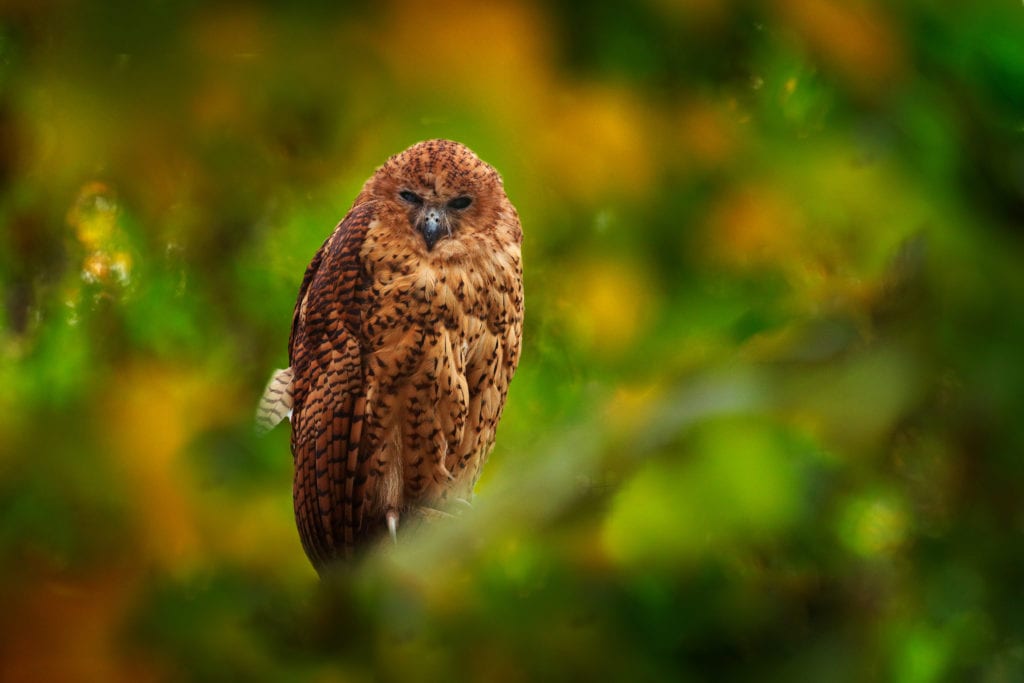 The Okavango panhandle is one of the best places to see this rare, and endangered bird. The Pel’s Fishing Owl is the second largest owl in Africa, and one of the few true fishing owls. It measures round 50-63cm in length and spans around 53cm across the wings and weighs up to 2.35kgs. Interestingly it lacks the soft flight feathers of other owls as stealth is no necessary for snatching their underwater prey. 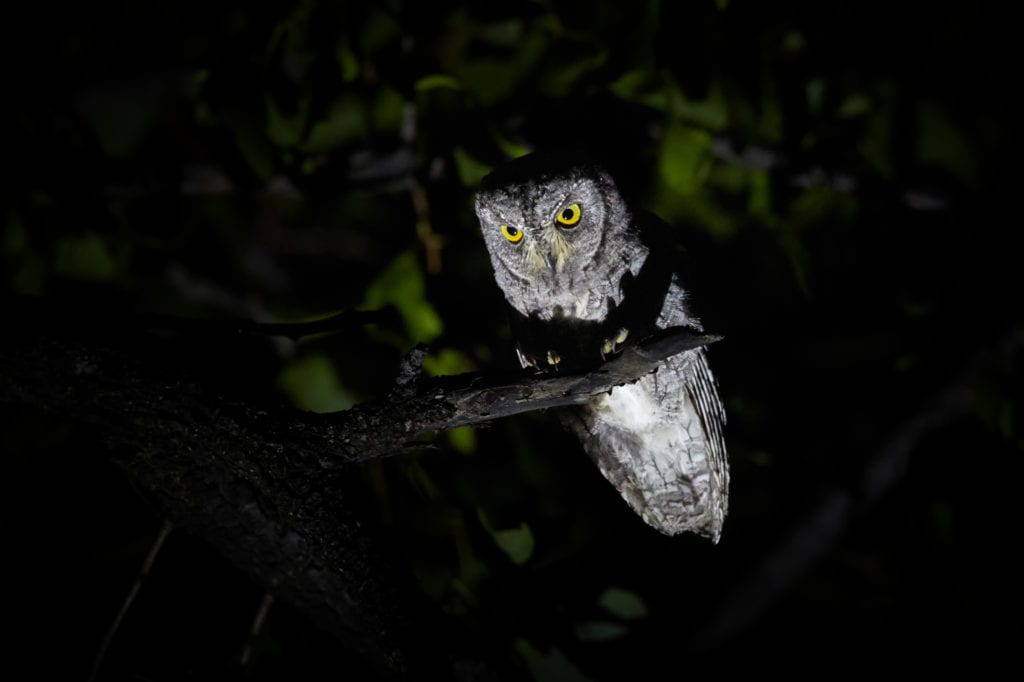 Very similar to the Southern White-faced owl but around half the size. The Scops Owl is not much longer than a sparrow. It nets in natural tree whole or woodpecker nests. It feeds on small insects, rodents, birds, geckos and frogs. It’s call is a familiar sound of the bush at night, a purring ‘prrp’ sound repeated every 5 seconds or so. The Scops Owl is around 18cm long and weighs between 45-100 grams. 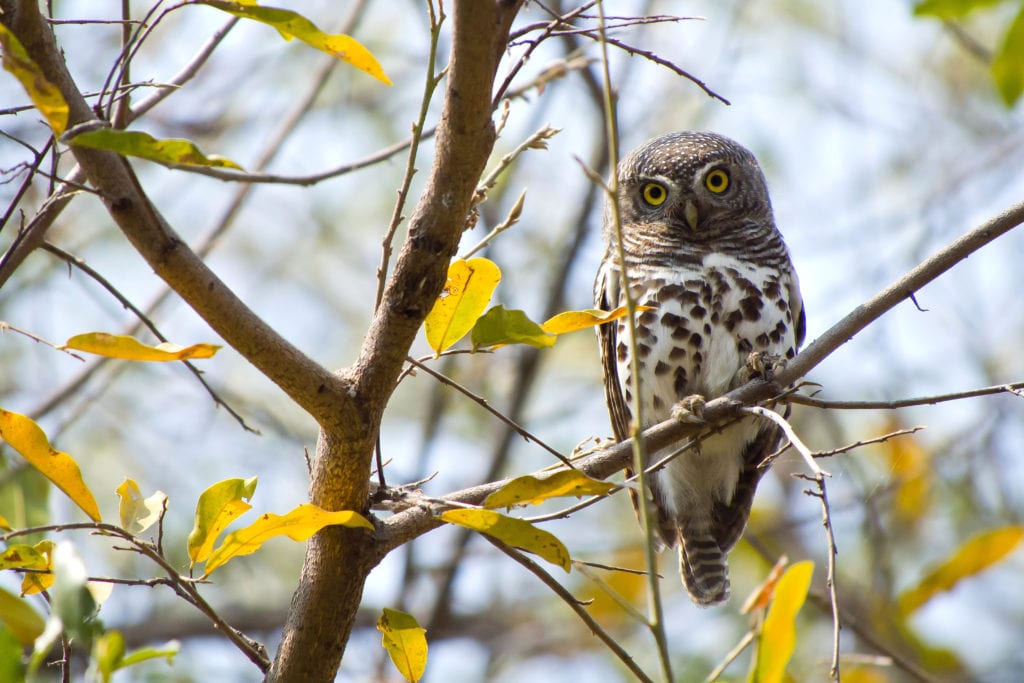 Similar to the African Barred Owlet but about half the size with spotted, not barred markings on the head and with false black ‘eyes’ at the back of the head. Often partly diurnal and seen during the day. The Pearl-spotted owlet is a bold hunter that will prey on rodents, bats, lizards and snakes. It’s call is a series of shrill whistle. Around 19cm in length and 75 grams in weight. 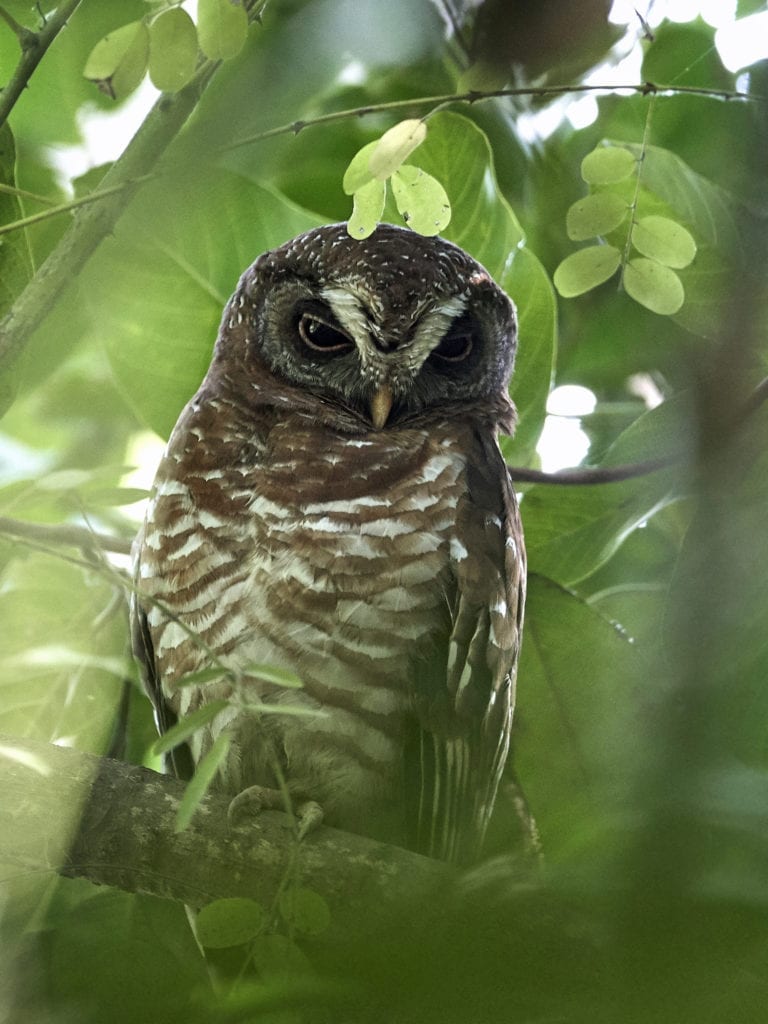 The African Wood Owl usually emerges soon after dark and calls can go throughout the night. It has a rhythmic series of hoots quite typical to owl song: who who, who who who-are-you. It feeds mainly on insects and small birds but also rodents, snakes and small mammals. African Wood Owl is around 35cms in length and 250-350 grams in weight. 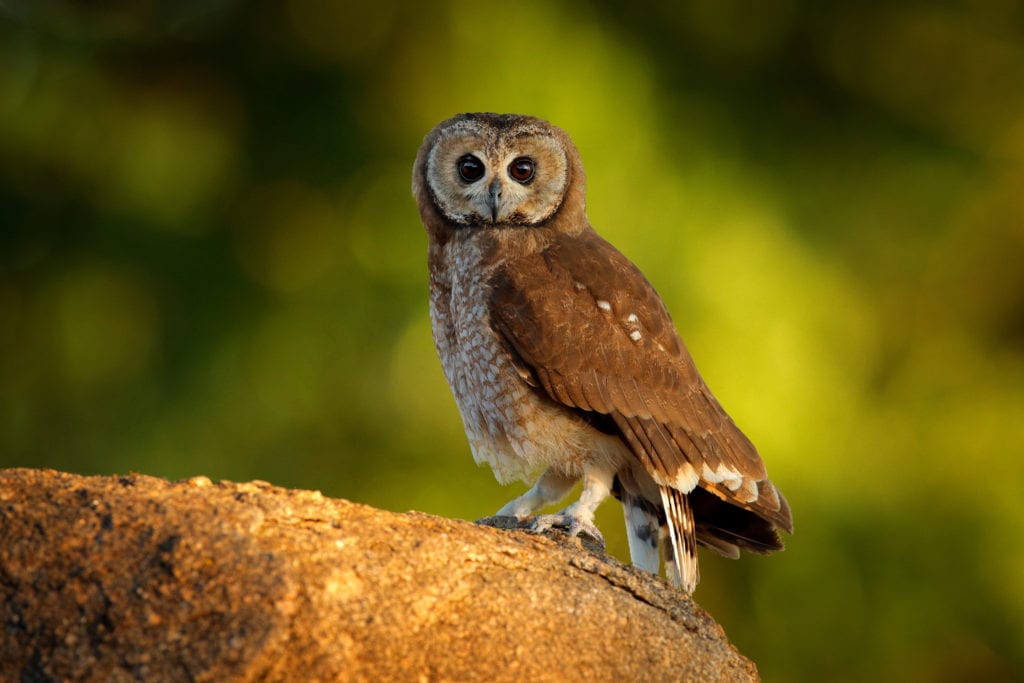 The African Marsh owl is more active during the day than other African owls, often hunting at dusk and dawn, especially in winter so you have a better chance of seeing him as you set off on your game drive. These owls roost in a hollow on the ground and hunt in flight, mostly inspects and rodents. It has a horse grating call, sometimes likened to tearing canvas (worth remembering in case you think you have something tearing at your tent!). The African Marsh owl is around 35cms in length and 225-370 grams in weight. 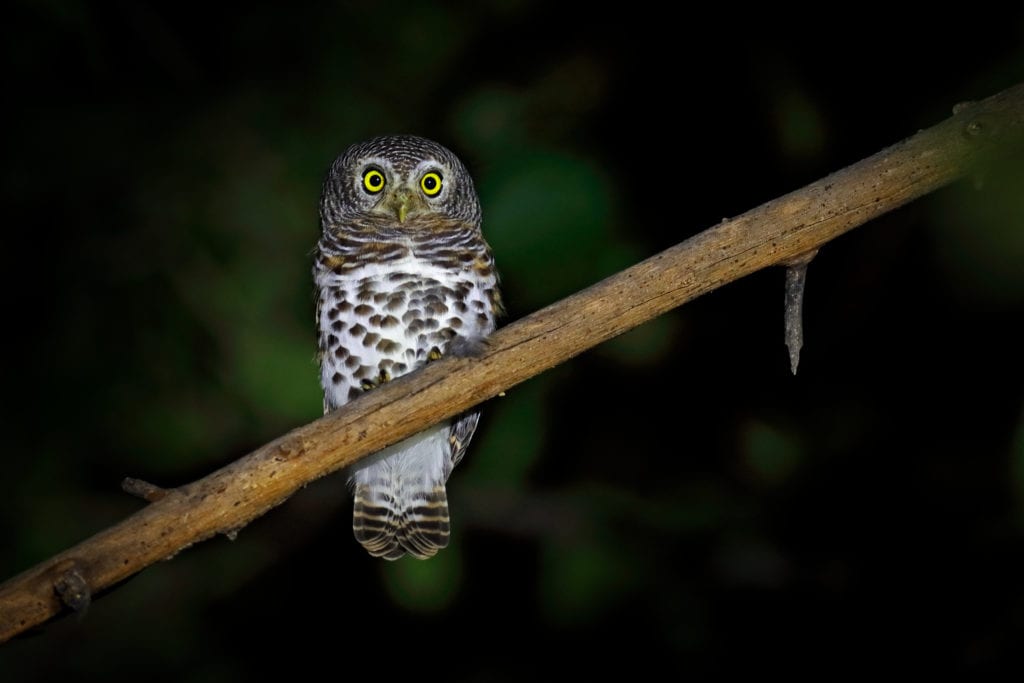 Very similar to the Pearl-Spotted Owlet, but larger and with barred, not spotted markings on the head. The African Barred Owlet is partly diurnal, while most active at night is often seen and heard during the day. Hunts mainly from a perch watching the ground – feeding mainly insects, rodents, lizards and birds up to the size of a hoopoe. The calls is a series of purring notes. The African Barred Owlet is around 20cms in length and 80-140 grams in weight 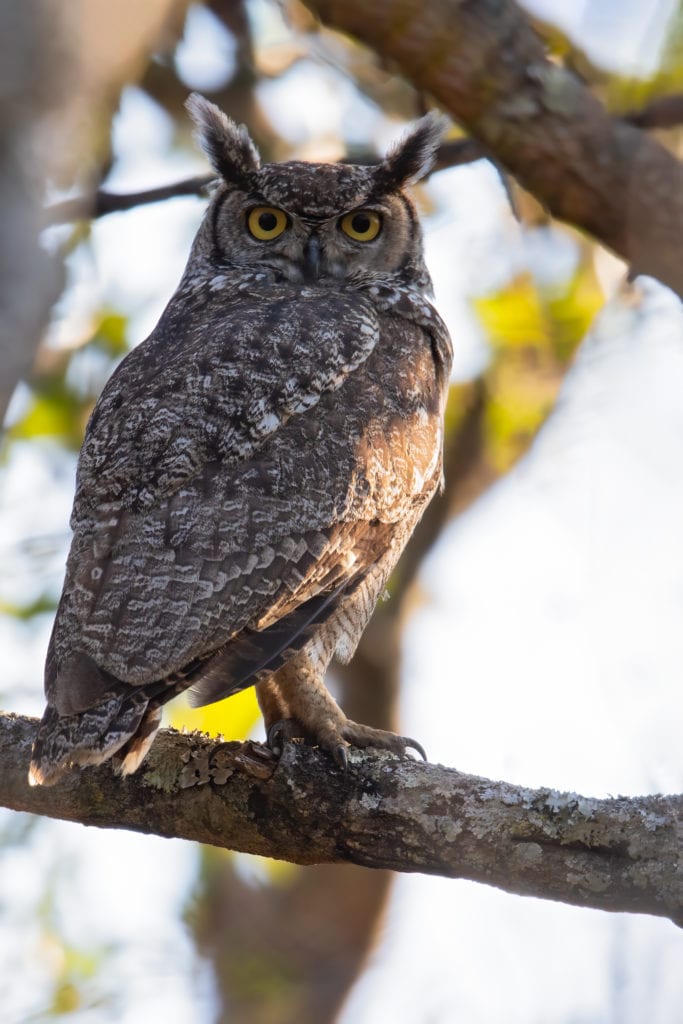 The Spotted Eagle Owl is a medium sized owl with prominent ear tufts and the most common large ‘eared’ owl in the region. Mostly active at night, it feeds on rodents, birds and mammals up to the size of a bushbaby.  It has a genial whoo whoo or whoo-are-you call, rising and falling in pitch.  The Spotted Eagle Owl is around 40-45 cms in length and 450-900 grams in weight 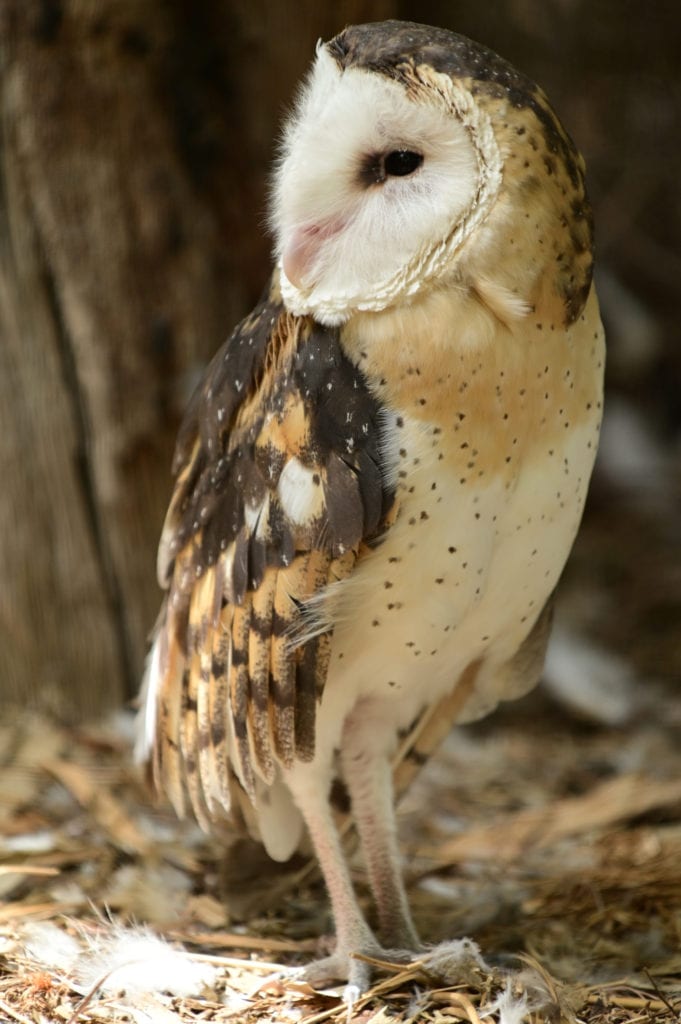 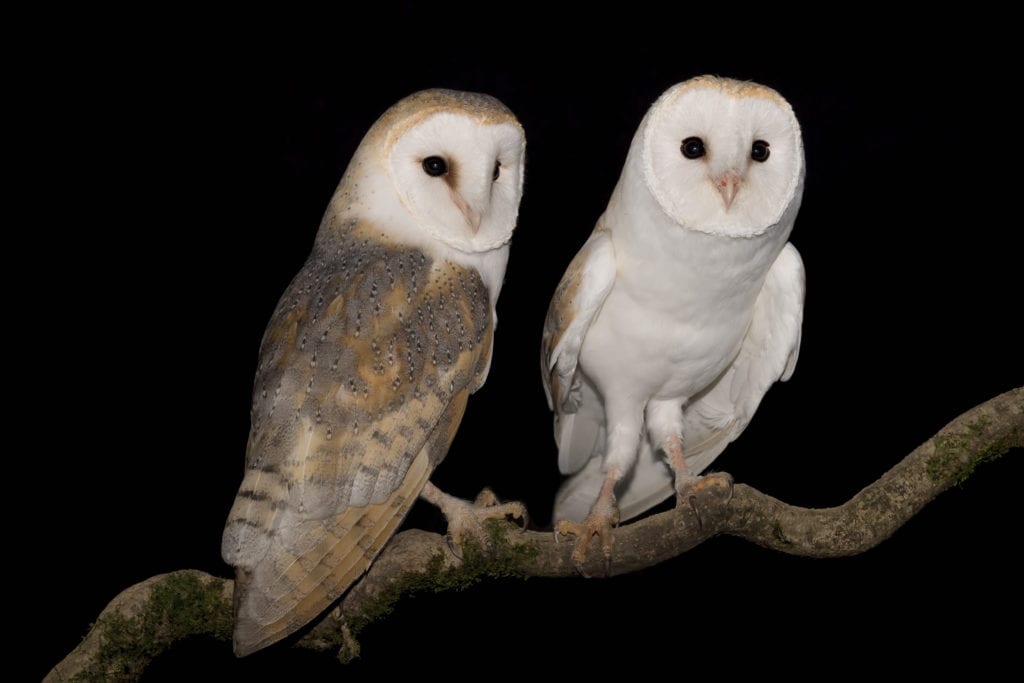 A distinctive bird recognisable for its white heart-shaped facial disc and almost ghostlike appearance. It is similar to the larger and darker African Grass Owl. It has a harsh hissing screech. It is found in woodlands often in and around human settlements. It hunts soon after dark on small rodents, birds, lizards and frogs.