Where to see the Big Five in the Okavango Delta

Due to its great conservation efforts and anti-poaching programmes, the Okavango Delta is one of the best places in Africa to see the Big Five. This is all the more impressive when you consider the Okavango is an unfenced wilderness, carefully protected through a number of discrete but complex and costly programmes.

The Big Five refers to elephant, rhino, buffalo, lion and leopard. Some may be surprised by the list, perhaps wonder why the beautiful cheetah or wild dog is not included, or the hippo which should surely be big enough to join the list?!

The term ‘big five’ has come to symbolise the ultimate big game photographic safari, though it is interesting to note that its origins are in hunting. The ‘Big Five’ was an expression used by hunters back in the day to refer to the five most dangerous animals to hunt in the bush and therefore the most impressive to successfully shoot. This explains the buffalo, not perhaps the most beautiful beast but hugely dangerous, particularly on its own. And where there are buffalo, lion are never far away, buffalo being their preferred prey.

Hunting safaris no longer run in the Okavango, only photographic safaris, but the expression has stuck and come to represent the quality of a safari – speaking for the diversity of the safari and the big game viewing opportunities.

Botswana offers superb opportunities to see the Big Five on safari. However sadly the rhino has become a rare sighting due to poaching and is only frequently seen in certain very well protected areas.

Apart from rhino, most camps in the Okavango will offer good opportunities of seeing the Big Five and big game generally during your safari.

Here are some of our top tips for camps with a particularly good track record of specific species sightings:

2. Buffalo – the Duba concession is famous for the large herds of buffalo which roam the area, in constant conflict with the resident lion. These dramatic battles have been beautifully captured on a number of award winning Nat Geo documentaries by the founders of Duba Plains Camp and Duba Explorers Camp. The dynamics have changed since the filming, the lion pride has split so the lion and buffalo interactions during the day time are not as common anymore, but there are still plenty of buffalo. (And less lions means more predators such as leopards and wild dogs). Other areas notable for big buffalo herds are the Mapula reserve (staying at Mapula Lodge, Kadizora and Bushman Plains) and the Chobe and Linyanti riverfront. Huge numbers are seen in these areas during the dry season.

Lion – Despite the aquatic environment, the Okavango is home to some of the highest numbers of lion in Africa. And some of the largest, due to the abundance of buffalo and other general plains game. It is also thought that walking through the waters helps to build strong muscles. The Okavango has good resident lion numbers throughout the Delta. Some of the best camps to see lion include Chitabe, Sandibe, Kwara, Duba, Gomoti. The Kalahari black mane lion is truly an amazing site and Tau Pan (Tau means lion in Setswana) is a great spot to see these cats, also Dinaka and Leroo la Tau (meaning paw print of the lion). In southern Chobe, the lions of Savute have learnt to hunt elephant and hippo – see them from Savute Safari Lodge.

Leopard –This beautiful cat is one of the most popular African animals and high on most people’s wish list. But famously elusive. Usually extremely shy cats, there are a number which have become particularly relaxed around vehicles. Leopard are found throughout the Okavango. The Moremi Game Reserve has very good regular sightings of leopard which have enjoyed the protection of thee reserve for generations. Camp Moremi, Camp Xakanaxa and Okuti all offer good chances to see these cats in the Moremi. Other camps in the Okavango, set on private concessions and which offer good chances of seeing leopard include Tubu Tree camp – which has seen a number of film crews visit to follow their leopards.  Kanana Camp in the western Okavango also has an excellent track record for leopard, and Pom Pom too.

Rhino – Botswana has seen less rhino poaching than many of its neighbours and indeed many rhino have been relocated from South Africa to Botswana for safety at huge cost. Conservation charities, such as Rhinos Without Borders, together with camp operators including &Beyond and Great Plains, have relocated 87 rhino from South Africa to Botswana (as at December 2019). The best places to see rhino now are in specific pockets of the Okavango which are heavily protected such as Chief’s Island (staying at Mombo or Chief’s Camp, the only camps on the island). Or the northern Okavango, in the Duba concession staying at camps such as Duba Explores and Duba Plains and in the south east of the Okavango, staying at camps such as Sandibe, Chitabe and Gomoti Plains. 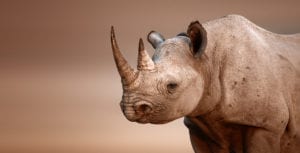